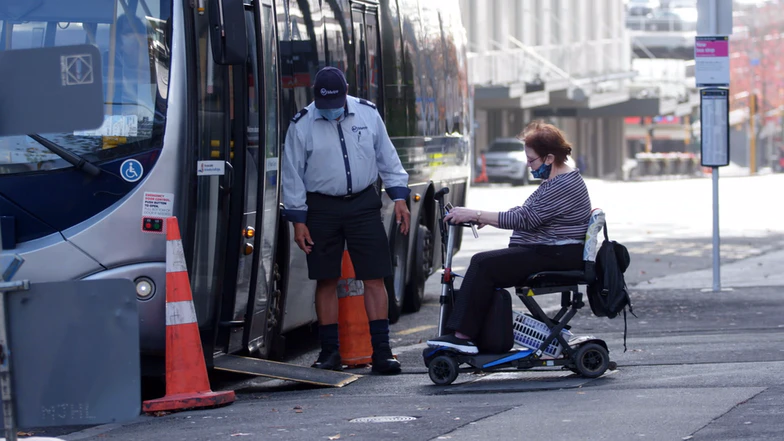 Usually there's no stopping Dorothy Dawson. But Invercargill City Council has managed to do just that.

Despite appearing to meet legal requirements Invercargill’s Dorothy can’t understand why getting her scooter on a bus is such a problem.

The Council instructed bus drivers not to allow mobility scooters onto buses.

This was a devastating blow for Dorothy. She has a permanently injured spine and relies on her scooter. She'd been driving it on the bus every day, neatly manoeuvering it into the space for people with a disability.

She'd travel by bus to the library, to aqua aerobics and to do her shopping which she'd bundle into the scooter trolley. But that all came to an abrupt halt when she says "a driver challenged me at the door and said you can't come on the bus".

The driver said if she had a problem then she should talk to the council. She said "don't worry, I will".

In fact, she spoke to several Council employees and the explanation was that the latest Waka Kotahi guidelines had made it clear that mobility scooters were not allowed on public buses.

This contrasts with wheelchairs which are allowed. Dorothy argued that her mobility scooter easily fell within the size and weight limits specified for wheelchairs. The council made some concession saying that Dorothy could get off her scooter, pack it up and walk it on to the bus.

Dorothy wasn't happy with this compromise, explaining "it takes more time to wheel the scooter onto the bus and I'm unsteady on my feet so I fear I might fall."

In May, she approached Fair Go and said she could meet in Tamaki Makaurau Auckland as she was flying up from Invercargill for a mini-break.

Once she arrived, she found she was able to drive her scooter onto buses with no problem, "I motioned to the driver, he put down the ramp and I drove on'.

We raised this with Invercargill City Council's roading manager, Russell Pearson. However, he said there'd be no change in Invercargill unless Waka Kotahi changed it's guidelines.

He explained their position by saying "it's a national issue, and wheelchairs are usually much more manoevoureable than mobility scooters so they can make zero turns".

He agreed to advocate to Waka Kotahi on Dorothy's behalf but only once he was convinced her mobility scooter could drive onto the bus without any problem for the bus drivers. He said he'd arrange a meeting with Dorothy to take a look. But weeks went by and no meeting took place.

Meanwhile Fair Go discovered that in the Waikato any mobility device that can be easily manoeuvered and fits the specifications laid out by Waka Kotahi are welcome on its public transport.

That would include Dorothy's scooter. Councillor Angela Strange said they were confident this followed the intent of the guidelines which should be all about keeping disabled people mobile.

Fair Go contacted Waka Kotahi and explained the situation, hoping it would see sense. It reviewed the guidelines and agreed that a revision was required given the rapid change in mobility device technology.

It now says "we support inclusive access to public transport where a device can be safely manoeuvred and accommodated on board. We’ll follow up with regional public transport authorities to clarify".

Dorothy was thrilled and hoped this meant she could get back to driving her scooter onto the bus in her home town.

But Russell Pearson of Invercargill City Council remained resolute that he wanted to check Dorothy's scooter for himself.

That is yet to happen but Dorothy is confident she can prove her compact scooter won't be a problem "I've done it, I can drive it on now in one clean sweep".

Step in the Right Direction

As for making life easier for bus drivers, Fair Go has suggested a council-run stickering system that mobility scooter users can apply for to prove their particular device fits the guidelines.

Dorothy feels this is all a step in the right direction, not just in Invercargill but the whole country "that's what I was aiming for, to help other people as well as myself".